So a few days ago my son went to a local park and met some older boys. Not much older, they were between 7-11 years old. Well they seemed nice enough and he told them how he plays Minecraft and Destiny and how he’s level 32. One boy says “are ya a nerd?” giggling to his mate then saying “go on, say you’re a nerd!”.

Is my son a nerd for liking video games in the modern age where it’s socially accepted that kids play games and don’t feel they have to hide this hobby from everyone in fear of being bullied?

Is my son a nerd because he is quite bright even though these lads probably know how to multiply and my son has only mastered halves and quarters?

Is my son a nerd because he needs glasses to fix is lazy eye which is not his fault and will probably end up requiring surgery?

Neither seems like a fair reason to call a 5 year old a “nerd”. Or perhaps I should be proud.

He likes video games and plays with his mummy and daddy, if that makes him a nerd then good on him.

He is a clever young boy and doing well in his class and even amazed his teacher at school, if that makes him a nerd then good on him.

He wears glasses like a large portion of children these days do for various reasons and doesn’t refuse to wear them, if that makes him a nerd then good on him.

If he’s a nerd for any of those reasons then I am proud of him for being a nerd. After all, why should the word “nerd” be considered a bad thing?

Since my daughter was born and my old health visitor was no longer able to care for me as we were out of her catchment area I was introduced to another woman and she had made my life hell. I’ve … END_OF_DOCUMENT_TOKEN_TO_BE_REPLACED

My parents use to own (and I hope they still do!) a series of small books called “Love Is…” which were just adorable. I use to read them over and over as a child and as a teenager as they were so simple and very sweet. So I want to write about one thing that means so very much to me and few days ago I feel like that’s more a reality than ever before… Family.

Both my parents have been before and divorced, then met one another at work and have been together since. The sad part of that really is my dad had two children with his first wife and I can’t imagine how they must have felt when their dad left their mother for another woman as it’s something I’ve never been through. Of course he continued to see his two children and even today at the ripe old ages that they are in now (a polite way to say they are old) they are close by and we get to see them fairly often.

Now because these two boys from my dad’s previous married aren’t actually my brothers (half-brothers is what they actually are – one whole brother if you want to make that joke) and are much older than me I’ve never really been close to them. You know what? I have to admit that makes me very sad. I don’t really consider myself a lone child as I do have two brothers, sure they are no longer living with either of their parents and they don’t share the same mother as me, but it’s modern times why should that matter. Infact on my 21st birthday I didn’t want anything apart from having both my brothers and other close family members together having a nice evening out. And we did, probably one of my much loved memories.

You see… my two brothers don’t seem to be close anymore. I don’t know why and I am not even sure they know either why that is. They are very different to one another as one is outgoing and comical and the other is more down-to-earth and serious, couldn’t be any more opposite to one another. So that was why I made a big deal that on that night BOTH my brothers (as I said I consider them brothers so will keep calling them that) were there and having a good evening out as a family. But I never knew my brothers very well. I know what they are like, where they live and what they do for a living but ask me what their hobbies are or favourite food is… I couldn’t tell you that one bit. I mean my oldest brother (both older than me but tend to say ‘oldest’ and ‘youngest’ as just makes sense to me) is 24 years older than me and I’m 25 years old. So yeah I never got to learn about their favourite things and stuff and always wished I knew them better, but few days ago I was at my older brother’s wife’s daughter’s 18th birthday (errr… could I just say step-niece? Bit is a mouthful!) and we got to speak together for the first time in… I could honestly not tell you when.

He was his usual jolly self (with the added help of a few drinks) and told me he was proud of me. I was stunned for a moment and said than you and then he told me he wanted to keep in touch more and apologised for not being around a lot. A few other things were said and I admit I got a bit teary and gave him a huge hug and kiss. Even as I write this out I’m crying, not because I’m sad… I’m very happy. Well in a way I’m sad because so many years have passed but happy that he feels the same as me.

So next year I’ll be doing my best to stay in touch with my brother and try and get our son to see his Uncle more often. He’s just fantastic with kids and they got along so well in a short period of time. Can’t miss these precious moments for anything and I’ll try my best to do something about it.

Life on a Second Floor Flat isn’t great, especially when there is no lift for us to use. Here’s a picture of Gadget Dad pulling Baby Al in the Britax B-Smart up the stairs. 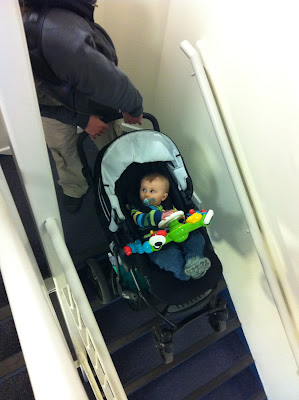 And here’s a picture looking down from our main door to the ground floor. 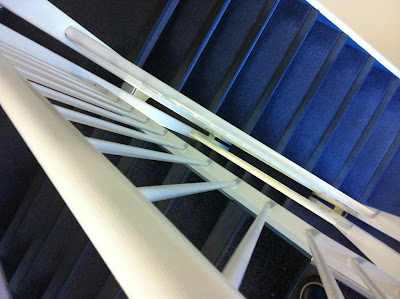 A long way down, right?
Anyway this has become the norm for us and lived with the fact we bump the buggy down the stairs and then pull it up until we finally get to the second floor. It does feel like forever some days and man you can break a sweat from doing it. My mom (who I know reads my blog, hello!) tried to help me but bless her she couldn’t as she suffers with problems with her leg and shoulder. She can’t get over the fact I do this at least three times a day, one of which I tend to have Gadget Dad with me and that would include our weekly food shopping so not only do we have a pushchair to take up the stairs but we also have heavy bags of shopping.
Been doing this since day one. I use to take Baby Al out nearly every day but a week after Gadget Dad’s 2 week holiday ended I was on my own and suffered with back pains just from taking the travel system up and down the stairs every day. I found myself stuck in the flat for a few weeks in pain and the idea of pulling the pushchair up those stairs made me groan.
Some of you may be thinking “Why not leave the pushchair downstairs?” and you’d be right in thinking that would save us a load of aches and pains. However this is where the mailboxes are so parking it there and leaving it gets in the way of the mail boxes, plus it’s in our contract with the management company that own the flats we are not allowed to leave anything outside our flat and if we do they are legally allowed to remove it. I don’t think I want to have my B-Smart taken away from me!
So I would like to ask if anyone else does what we do? Do you think I’m crazy for living like this? Or maybe you have an idea for us that we can try out.

You Can Get Free Gift Cards For Shopping, Searching and Discovering What's Online at Swagbucks.com